News
Emiliano Martínez / Vice President of the Santillana Foundation: "Publishing is fascinating!"
El Liber pays tribute to his career due to "his corporate and professional vocation".
Madrid

Though Emiliano Martínez has been a publisher since his youth, it was initially to be an unlikely career choice and vocation. Jesús Polanco, with whose team he helped found Santillana in 1964, initially entrusted him with “some little books" and that’s when he had his eureka moment: “Publishing is fascinating”. He has tried his hand at almost everything in Santillana, and has been CEO of its two branches, education and literature. He is now Vice President of the Santillana Foundation. In recognition of his career, Liber is now set to honor him. Here he talks of his trade.

Question: Why do you think you’re being honoured now?

Answer: It’s a tribute that’s generally given to industry veterans whose careers are behind them. It’s also a nod of approval towards the profession. The job of a publisher is to bring together the chain of creation, production and dissemination of a book. That’s what these kinds of tributes honour, and I was involved in setting it up myself many years ago. And now it’s my turn. 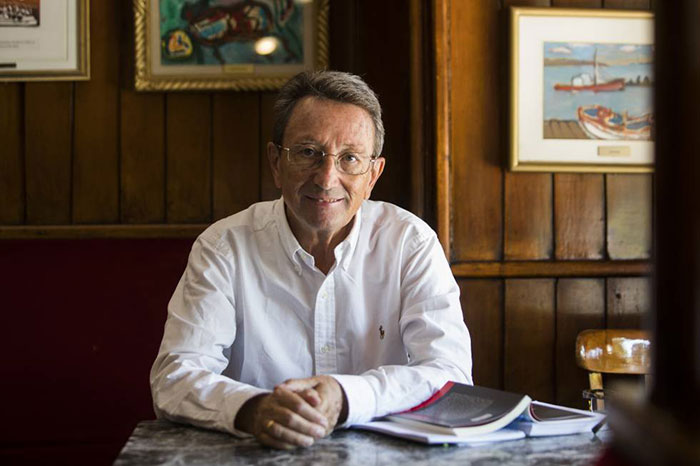 Q. Much of your work is linked to the Americas. Is the government doing all it should to support this goal of Liber?

A. Public authorities should be sensitive to these symbolic values; and a cultural community such as this one, that is united by language, needs to be nurtured. So they have paid some attention, even with the ups and downs of public administrations. But the development of Liber needs more support, it needs to be given greater cultural weight.

Q. You represent the idea fostered by Polanco, when he was at the helm of Santillana: America was his goal.

A. It was indeed. At first, I was with him in education. One day, half a century ago, he sent me to Buenos Aires to help out on an Argentinean version of adult education books that I was involved in. I found it so interesting that after I got back home I started to think that this might be my calling. Publishing is fascinating! In that specific case, I had to take into account different needs, Argentinean and Spanish. It was fascinating. Over time, Polanco got me to bring out some trade book and literary imprints, that were to become part of Santillana: Alfaguara, Taurus, Aguilar… We had to build up a group and then make the jump with these imprints to the Americas. That job lasted 10 years and really came together under his daughter Isabel, who made this group of publishing houses truly global.

Q. So this prize is a reward for your vocation...

A. One that was encouraged by Polanco, with his professional passion for publishing and his American vision; Francisco Pérez González, or Pancho, was another great mentor, who brought an institutional outlook to the Spanish publishers. He was the one who started Liber, and defined it as a meeting place for American colleagues passing through Madrid or Barcelona on their way to the Frankfurt Book Fair.

Q. And it was during your career, 30 years ago, that we saw the creation of the International Book Fair (FIL) in Guadalajara (Mexico). Have you ever felt a touch of envy, as a Spanish publisher, as promoter of Liber, as that event has gone from strength to strength?

A. Of course! Since the very beginning of the FIL, our group, precisely because of its pan-Hispanic vocation, has worked closely with that event, which is headed by Raúl Padilla. He complained about the initial lack of support from the publishing industry there, and we told them, our colleagues, that this would be a great platform. And it has been. FIL is the natural extension of any publishers’ vision: to gain readers, and to create a rich cultural ecosystem. To achieve this, we must gather together allies, work with others, convince the authorities of the cultural and social significance of books. In times of crisis, that discourse grinds to a halt, it’s as if an icy wind blows in and sweeps away or devastates a whole crop. The most committed publishers, the most visionary, should seize on opportunities such as the FIL.

Q. What does Liber need to do if it is, at least in part, to follow in the footsteps of the FIL?

A. It has to maintain its own, unique identity and build on the work already done. And then there are other initiatives. For example, foreign trade missions, which have already encouraged book industry professionals from the US to come here, an initiative that follows a similar one at the FIL. And we have to do something here that is amazing in Guadalajara: they bring in crowds of younger readers to meet authors, and those young readers then buy books by those authors.

Q. Back in the mid-1990s, the imminent death of the print book was declared at the Frankfurt Book Fair. And yet it’s still alive. What keeps it alive?

A. Umberto Eco once said that, like scissors or bicycles, as an object, the book was made perfect at the very moment of its invention. It is easy to handle and, physically, is comfortable for reading. Professor Francisco Rico has said that reading from a screen produces reading in hurried strides. With the print book we follow the path that the author has laid for us. And that’s why the prophecy has not come to pass. And the book has remained synonymous with quality reading.

Q. You were CEO of Santillana, where you brought together general-interest trade books and educational books. How did you combine both areas?

A. I learned my trade in educational publishing. I took to it like a duck takes to water. In managing cultural publishing, I had to take into account the autonomy of publishers, and they had to bear in mind that we needed to look to the Americas as a company goal. Respecting the publisher was to respect the authors.